What is blockchain synchronization? #

Blockchain synchronization (“sync”) is a key part of a blockchain system. It handles retrieval and propagation of blocks and transactions (messages), and thus is in charge of distributed state replication. This process is security critical – problems here can be catastrophic to the operation of a blockchain.

ChainSync is the protocol Filecoin uses to synchronize its blockchain. It is specific to Filecoin’s choices in state representation and consensus rules, but is general enough that it can serve other blockchains. ChainSync is a group of smaller protocols, which handle different parts of the sync process.

At a high level, ChainSync does the following:

As a networking-heavy protocol, ChainSync makes heavy use of libp2p. In particular, we use three sets of protocols:

More concretely, we use these protocols:

Aside from libp2p, ChainSync uses or relies on the following components:

ChainSync is written in terms of Graphsync. ChainSync adds blockchain and filecoin-specific synchronization functionality that is critical for Filecoin security.

When running Graphsync, Filecoin nodes must respond to graphsync queries. Filecoin requires nodes to provide critical data structures to others, otherwise the network will not function. During ChainSync, it is in operators’ interests to provide data structures critical to validating, following, and participating in the blockchain they are on. However, this has limitations, and some level of rate limiting is critical for maintaining security in the presence of attackers who might issue large Graphsync requests to cause DOS.

We recommend the following:

Prior versions of this spec recommended a BlockSync protocol. This protocol definition is available here. Filecoin nodes are libp2p nodes, and therefore may run a variety of other protocols, including this BlockSync protocol. As with anything else in Filecoin, nodes MAY opt to use additional protocols to achieve the results. That said, Nodes MUST implement the version of ChainSync as described in this spec in order to be considered implementations of Filecoin. Test suites will assume this protocol.

Notes on changing TargetHeads while syncing #

These bandwidth calculations are used to motivate choices in ChainSync.

If you imagine that you will receive the header once per gossipsub peer (or if lucky, half of them), and that there is EC.E_LEADERS=10 blocks per round, then we’re talking the difference between:

2MB in <5s may not be worth saving– and maybe gossipsub can be much better about supressing dups.

Is a graph necessarily connected, or is this just a bag of blocks, with each disconnected subgraph being reported in heads/tails?

The latter. The partial graph is a DAG fragment– including disconnected components. here’s a visual example, 4 example PartialGraphs, with Heads and Tails. (note they aren’t tipsets) 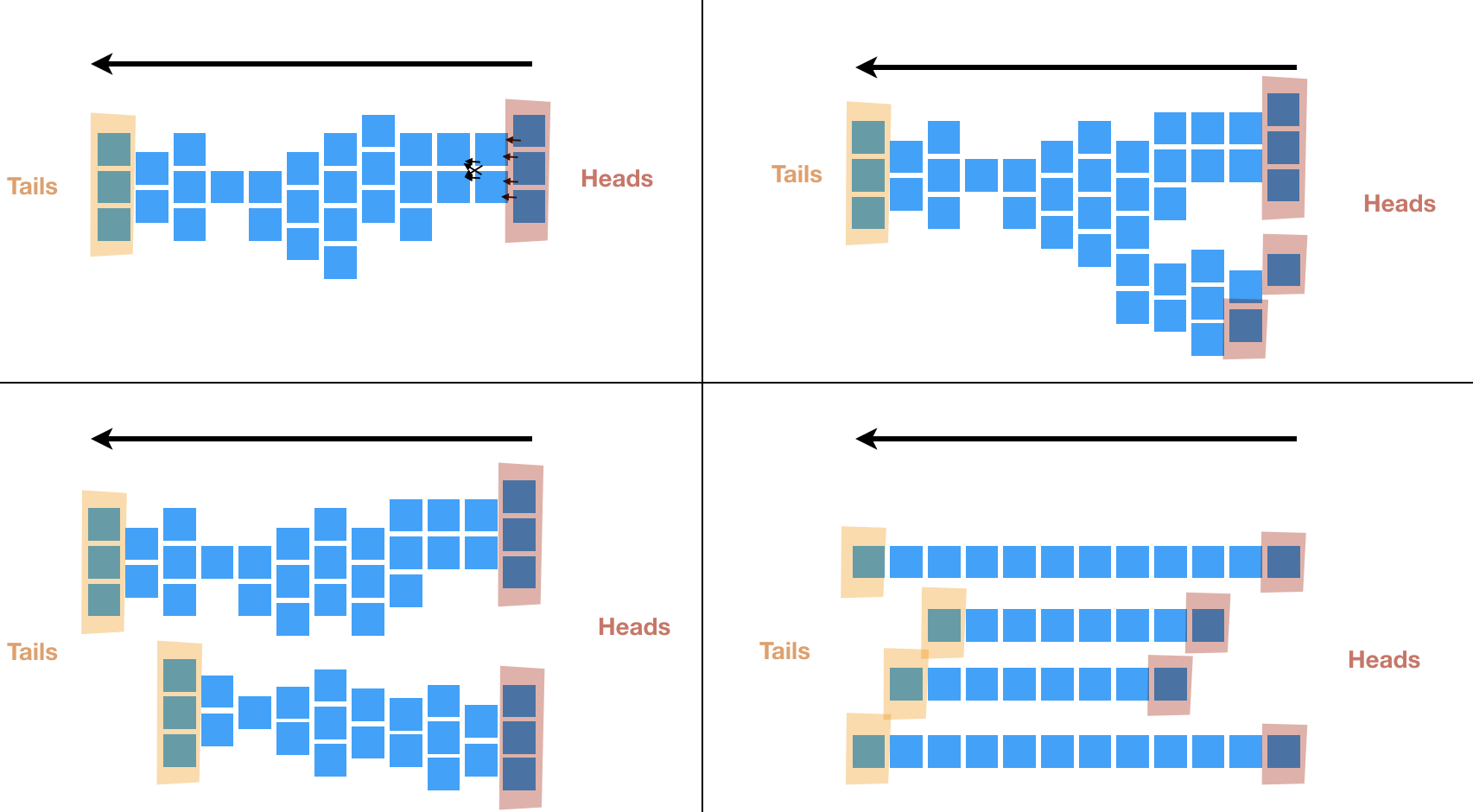